Conditions of extreme heat stress, such as those experienced during a heatwave, represent a dangerous meteorological hazard to human health. Disorders such as sunstroke are harmful to people of all ages and responsible for excess mortality in affected areas. In 2003 more than 70,000 people died in western and southern Europe because of a severe and sustained episode of summer heat. During that event, high air pollution levels were also recorded and associated to detrimental health impacts. 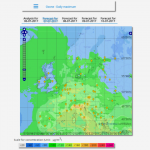 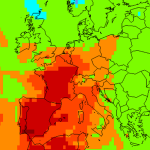